How does it work?

Different pathologies may lead to similar symptoms of dysphagia

Dysphagia can be caused by a number of underlying pathologies, such as stroke (including Wallenberg), oncological pathologies, Parkinson’s, Multiple Sclerosis, traumatic brain injury, or genetic factors.  The underlying pathology determines the effectiveness of treatment. However, during treatment, the therapist focuses on functional deficits, which manifest themselves as deficits in airway protection, bolus transport, or both. 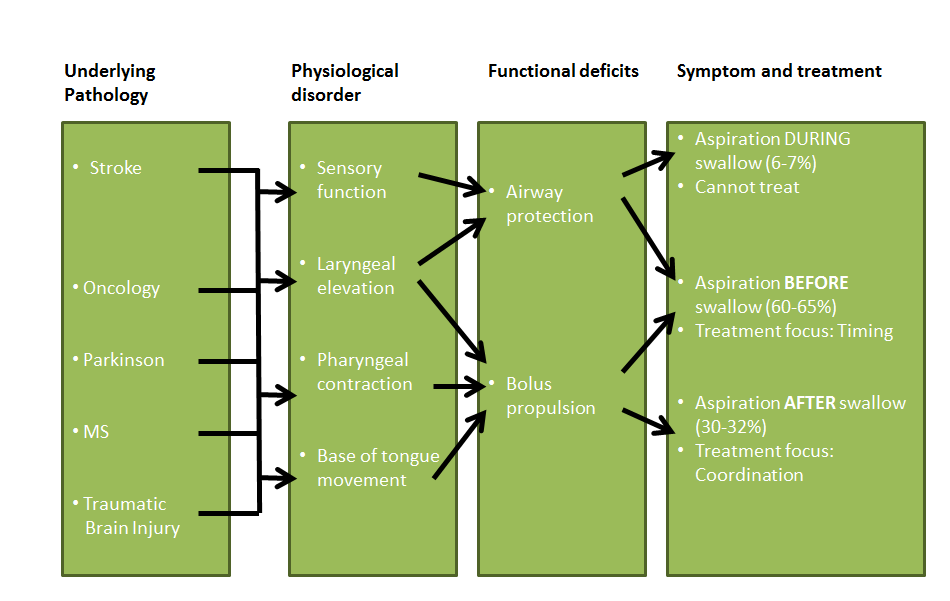 The treatment plan depends on when the aspiration takes place (before or after the swallow). In both cases, repetition and increased resistance are vital. In addition, the treatment focuses on timing and motor specificity, or on coordination, as summarized in the diagram below. 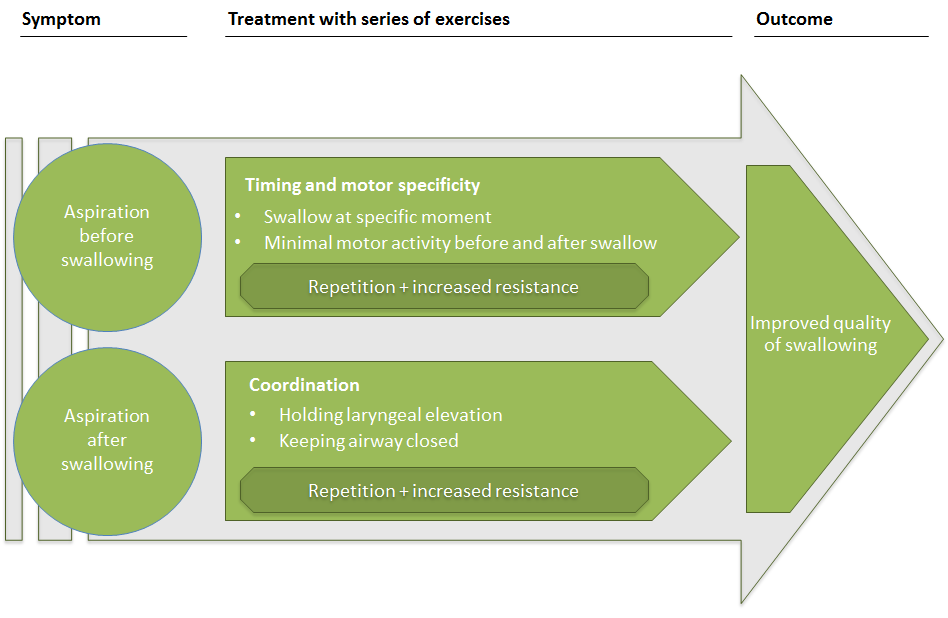 To improve control of swallow onset the patient tries to time their swallow to visual cues. The time between cues can be adjusted to the capabilities and needs of a patient to make it easier or harder. This often goes hand in hand with compensation behavior, which is visualized for the patient and can, therefore, be actively reduced during therapy.

In order to gain improved coordination of muscles used for swallowing, the well-known Mendelsohn maneuver is used. Supported by intuitive games or graphs the patient learns to indirectly modify specific aspects of swallowing, such as laryngeal elevation, and pharyngeal wall contraction.

Repetitions and increased resistance are important in both clinical pathways. They contribute to improved strength. As games  strongly motivate patients to keep practicing the swallow movement, this form of biofeedback facilitates the rehabilitation process. Functional patterns of swallowing are trained over and over with increased resistance (different consistencies). This has an impact on the timing and specificity of the swallow movement.

A program of repeated exercise for dysphagia treatment can induce changes in neuroplasticity, and contribute to an increased volume and strength of muscles and enhanced cooperation of the affected swallowing muscles, which will improve the swallowing capacity (Robbins, J., 2007). Surface EMG-guided dysphagia therapy that incorporates systematic and progressively more challenging swallowing exercises generate superior clinical outcomes compared to sEMG-guided exercises that do not (Carnaby-Mann,  G.D. et al., 2010).

By who and for whom is the SilverFit Rephagia being used?